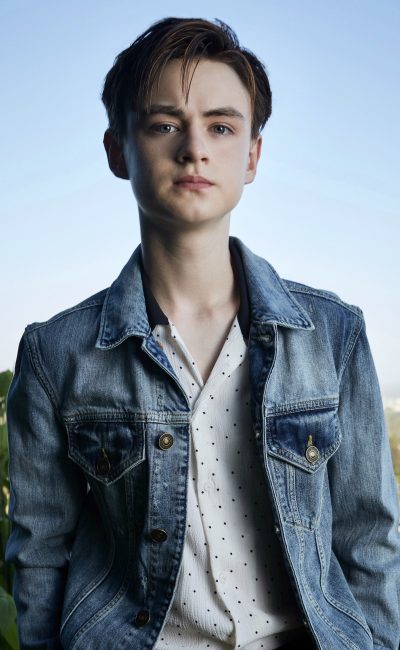 Jaeden Martell was born in Philadelphia, Pennsylvania, to artist Angela Martell and Wes Lieberher, an executive chef. In 2011, at the age of eight, he moved with his mother across the country to Los Angeles. He never expected that this adventure would lead him into a life of acting. Without any acting classes or training and shortly after arriving in Los Angeles, Jaeden began starring in a number of commercials. At the age of nine he made his big screen debut with a small role playing a young Chris Evans in “Playing it Cool” directed by Justin Reardon. In the summer of 2013 Jaeden made his way back to the East coast to film St. Vincent (2014), written and directed by Ted Melfi in New York. He was lucky enough to star in the film with legendary actors Bill Murray, Melissa McCarthy, and Naomi Watts. While filming in New York he flew back to California to meet Cameron Crowe, and booked his third movie to be shot in Hawaii. In the Hawaiian project, he shoots opposite Bradley Cooper, Rachel McAdams, and Emma Stone. In early 2014, he filmed Midnight Special (2016), written and directed by Jeff Nichols. He plays a boy with special powers who is on the run with his father (Michael Shannon). In his first film of 2017, Jaeden and Jacob Tremblay played siblings in the drama The Book of Henry (2017),with Naomi Watts playing their mother; the film was directed by Colin Trevorrow. Jaeden then starred as the lead, Bill Denbrough, in the wildly successful feature film version of Stephen King’s It (2017). He was previously credited as Jaeden Lieberher.